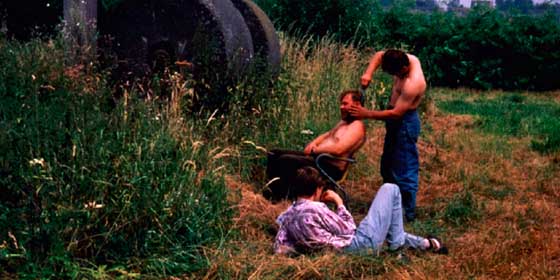 The basis for this exhibition is the photo book by Floor Hermans: Asparagus cutters from 1990 to 2004. He turned his experience as a housing company into an art project. About seasonal work in asparagus cultivation, undeclared work, survival and poor working conditions. After Poland’s accession to the EU, the situation changed. Now they are full citizens, working in all kinds of industries and at various levels.

In “Polish impressions” we show photos that Floor Hermans made during his visits to Poland in the 90s. They give an impression of the living conditions of the guest workers in their home country at the time. In the film room of the Asparagus Pavilion we show the film “the Poland Caravan”. In this film, Wiek Lenssen and Harrie Lennaerts follow some seasonal workers in search of work in asparagus cultivation. Daily at 11.30 am, 1.30 pm and 3.30 pm.

Also on display is work by the Italian photographer Sofia de Benedictis and the Polish photographer Antoni Czarczynski. Commissioned by Museum Onderweg, they conducted research into coexistence in North Limburg from October to December 2021 with a focus on labour migration. Both young photographers met themselves during their wanderings along campsites and monasteries. Their work gives an insight into the world of labour migration in the present time. Their results were previously shown in the Limburgs Museum as part of the Migration Lab, an initiative of Museum Onderweg.

An interesting exhibition. A representation of the developments surrounding the influx of labour migrants in North Limburg. To be seen in the Asparagus Tunnel.